You Say You Want a Revolution?

Reading the November 2017 issue of The Empty Closet caused—as it usually does—me to experience mixed emotions. Joy, because of the stories about adoption and other loving family issues, and fear because my own government refuses to recognize my right to even exist .

Having grown up in the ‘50s and ‘60s, I bought into the lies everyone else did. As Pete Seeger so memorably sang,

That dream was shattered when the nation ran headlong into Viet Nam, assassinations, and Watergate. The past 40 years have taught me that our government can’t be trusted to tell us the truth, that politicians—at least at the national level—exempt themselves from the laws they impose on the rest of us, and that we haven’t learned a damned thing from history. How are we supposed to react when the enemy is not at the gates but rather occupying the seat of government.

40 years ago I didn’t even know what “transgender” meant, much less the fact that it applied to me. But now we’re in the 21st century, when the spelling of the word “bigotry” has changed into “sincerely-held religious beliefs,” and we have both an occupant of the White House (I refuse to call that orange monster “president”) and an Attorney-General who both tell me I have no right to even exist, much less be treated with the same rights as everyone else in our country are.

What will be the fate of our nation if the very people who are sworn to protect and defend it “against all enemies, foreign and domestic” are themselves domestic enemies? Or are we as a nation no longer worthy of those freedoms and liberties we fought for in 1776, 1812, 1860, 1914, and 1941? Is this, as Jack Nicholson’s character asked, “as good as it gets?”

“And I don’t know a soul who’s not been battered
I don’t have a friend who feels at ease
I don’t know a dream that’s not been shattered
or driven to its knees
But it’s all right, it’s all right
We’ve lived so well so long
Still, when I think of the road
we’re traveling on
I wonder what went wrong
I can’t help it, I wonder what went wrong.”
–Paul Simon, “An American Tune” Copyright © Universal Music Publishing Group

Am I the only one who thinks these thoughts? Am I crazy? Or am I thinking clearly?

“I hold it that a little rebellion now and then is a good thing, and as necessary in the political world as storms in the physical….An observation of this truth should render honest republican governors so mild in their punishment of rebellions, as not to discourage them too much. It is a medecine [sic] necessary for the sound health of government.” – Thomas Jefferson to James Madison, Paris, January 30, 1787 (Emphasis added)

Fighting For Equality Means Equality for ALL

I used to think that it was axiomatic that striving for equality meant equality for everyone. Lately I’ve been shown how wrong I was in my thinking.

• ITEM: The Human Rights Campaign (HRC) has just endorsed Hillary Clinton for president. The frightening thing about this is that the Human Rights Campaign has never represented all LGBT people, but instead has concentrated on the rights of its majority faction; namely, rich white gay men. At the same time, Ms. Clinton is a (very) late-comer to LGBT rights, but she has always been a strong supporter of Wall Street. The HRC’s endorsement means that she will continue to side with corporate America over the general population.

• ITEM: I don’t make a big deal about one particular aspect of my racial heritage: that is the fact that I am part Mi’kmaq (also Micmac, L’nu and Mi’kmaw), a Canadian First Nations band. The reason I don’t make a big deal about it is two-fold: 1) I only recently discoverd this fact, and 2) while I may be racially connected, I am not culturally connected. That is, I know next to nothing about the reality of being Mi’kmaq, nor have I had the experience of growing up within that culture.

That being said, I do post and share many articles on Facebook dealing with Native Americans/Indians (NA/I) and First Nations (FN) issues. ANd while many of my Facebook friends share or comment positively about LGBT and racial issues when they concern African-Americans, I have yet to see one of them show any interest in my NA/I or FN posts.

This, despite some of them claiming “my great-grandmother was a Cherokee princess.” To those people, I suggest you read the excellent article, “Why Your Great-Grandmother Wasn’t a Cherokee Princess.” And for those who are too lazy to read, I’ll sum up the article for you: There is no such thing!

I think the reason so many people remain uninterested in these issues might be collective white guilt. After all, the biggest act of genocide in recorded history took place on North American soil. For more on this subject, go here.

Another reason might be the fact that the plight of the NA/I and FN haven’t really improved that much from the way they were in the 1800s. Most still live in abject poverty, wards of the State which still treats them like animals.

And a final reason is that we Americans (especially) and Canadians don’t like solutions to complex problems. We don’t like hard work unless it directly benefits us. After all, what does it matter to me that Leonard Peltier was sent to prison for life on the testimony of an “eyewitness” who admittedly never saw him? Or that he is slowly dying because he’s being denied access to medical care?

First they came for the Socialists, and I did not speak out—
Because I was not a Socialist.

Then they came for the Jews, and I did not speak out—
Because I was not a Jew.

Then they came for me—and there was no one left to speak for me.

It’s All Over But The Shouting

Shane Crone, left, and Diane Wiltshire take a photo in celebration
of the U.S. Supreme Court’s decision on same-sex marriage in
Washington, D.C.

Friday, June 26, 2015. Mark that date on your calendar. That’s the day the Supreme Court of the United States (SCOTUS) handed down its historic ruling that, in accordance with Article XIV of the Constitution of the United States, same-sex marriage is the law of the land.

Some say that date will go down in history; others say it will live in infamy.

I’ve heard all the arguments for and against marriage equality, and a few things stand out in my mind:

There are many more arguments against, but I’m going to limit myself to these three. I don’t want to spend hours writing any more than you do in reading. So let’s take each of these arguments in turn:

Arguments Based on Religious Beliefs

Far too many people claim that their objections are based on their religious beliefs. But let’s face it: in the United States, “religious beliefs” usually means Christianity. And all too often, Christianity means fundamentalist, Bible-pounding, hell-fire-and-brimstone interpretations of the Bible, for which there is no Biblical justification. I maintain that the Bible and software EULAs (End User License Agreements) have this in common: nobody ever reads the whole thing; they just scroll down to the bottom and click on “I AGREE.”

“But the United States is a Christian nation!” “The United States was founded on Christian principles.” I’m sorry to rain on your parade, but these claims demonstrate a complete lack of knowledge of United States history. I won’t go into details here, but instead suggest you Google® “Treaty of Tripoli,” or “Deism and the Founding Fathers” and educate yourself on the facts.

I have no problems with your religious beliefs just so long as they don’t trample my individual rights. As my father (the retired evangelical Lutheran minister) was fond of repeating, “Your rights end where my nose begins.” Pithy, but apt.

For centuries, religionists have cited scripture to justify enslaving, torturing, burning, and otherwise oppressing other people; when they were called to account for it, they screamed “You’re oppressing me! Religious freedom!”

For the longest time in the United States, the Bible was used to justify slavery. But fortunately, the bedrock of our legal system is NOT the Bible but rather the United States Constitution—imperfect as it is. When people are sworn into public office, they place their hands on a Bible or Koran or some other religious document and swear to uphold the Constitution; they don’t place their hands on the Constitution and swear to uphold scripture.

Here’s a partial list of legal rights that heterosexuals have, that are denied to the gay population:

If someone would explain to me how wanting the same rights as everyone else amounts to wanting “special rights,” I’d certainly appreciate it. 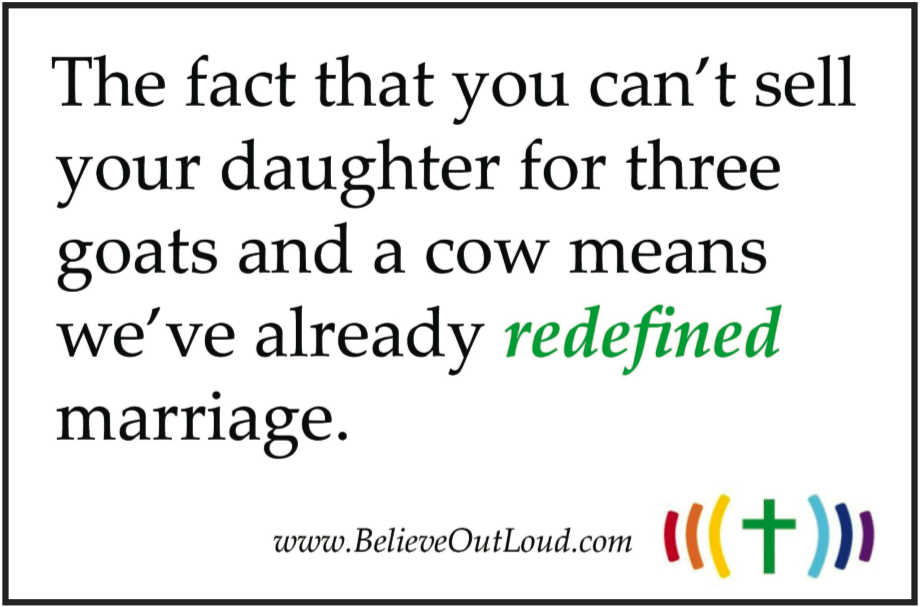 POINT: Marriage Is a Civil, Not a Religious Union

Yes, there are many religious ceremonies used to solemnize marriages. But consider: where do you go to obtain your marriage license? You go to your county clerk, and have the license issued by the government. That’s because the government considers marriage a civil arrangement, not a religious one.

And rather than complain that gay marriage threatens your religion, there is no law, statute, regulation or court decision requiring any religious person to perform, officiate over, or otherwise participate in a same-sex marriage. Yesterday’s SCOTUS decision doesn’t change that fact. If same-sex marriage is against your religion, nothing requires you to change your beliefs. All it does is prevents you from denying my right to marry whomever I wish.

Marriage equality (same-sex marriage [or, as I like to call it, “marriage]) is now the law of the land, and while that is a significant historic victory, we still have a long was to go on our march to what the Constitution promises us: Equal rights under the law.

A promise that for far too many of us still remains unfulfilled.